Posted on February 22, 2011 by chrismooremusic

Today was an epic day.

I began early this morning with the drum tracks, lead guitar, and lead vocals for “You Will Thank Me,” the recently-written, last-minute addition to The 2010 Project.  Thanks to Mike, I felt the pressure to record steadily, as we would be getting together around 9:30 for breakfast.  So, before I jumped in the shower at 9, I had recorded the key tracks for a new song and completed the lead vocals I had started for “I Would” last night.

After breakfast, these recording sessions were taken to a whole.  Nutha.  Level.

First up, Mike worked some production magic on “You Will Thank Me” to make it sound more full.  Then, before returning to “I Would (Prefer Not To),” he led me through some practice on palm muting, searching for the best effect on my pedal, and finally through a series of performances that have transformed this track into a huge electric production, a truly glorious guitar-driven song.

In talking with him, we developed the idea to record the song I had set aside to be a “hidden track” as a live performance, just the two of us in one or, as it turned out, two takes.  So, the bonus track on my new album will be the first-ever officially released Dry-Knuckle BedHeads recording, “The One For Me,” featuring me on guitar and harmonica and Mike on the hand-made (old-school) maracas my sister brought home from the Dominican Republic years ago. 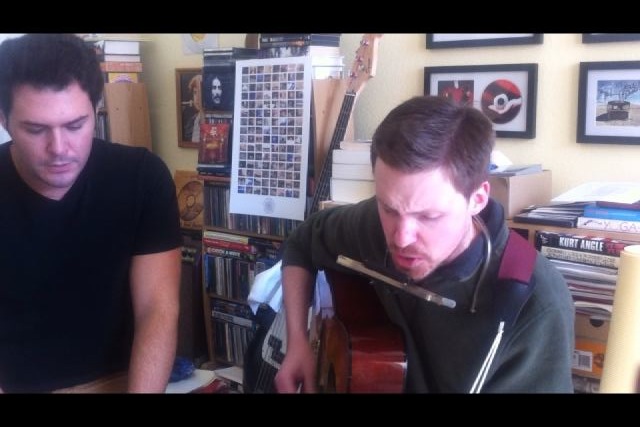 The Dry-Knuckle BedHeads rock out

If you don’t want to wait until the album comes out, you should click on the Dry-Knuckle BedHeads tab in the toolbar above and listen to “The One for Me,” as well as “I Already Know It’s You (California),” one of the other three songs we recorded today.  This song is a Mike Fusco original, and features him on guitar and lead vocals, with me accompanying on harmonica.

We also recorded two other Mike songs: a rocking version of “Do You Have a Sister?,” previously heard in his solo performance on the Laptop Sessions blog, and a heartrending performance of “Back to Reality,” both of which will be converted to .mp3 and posted soon with additional pictures, so check back soon!

To make a long story short, the remainder of my day included: a candid conversation with Mike about home, traveling, life, love, goals, dreams, reality, and the unexplored potential of mOu; my second eating-out lunch of the week (a break-week tradition); and last, but not least, driving the Fustang, which added several more reasons to my list of why I should consider buying a muscle car for my next automotive purchase.

If you’ve made it all the way through this blog entry, I thank you for being so patient and interested, and I promise to bring you some great music at the end of this long 2010 Project journey!

Oh, and Mike and I call dibs on the title for our new production company/label: “Em Eff Productions.”  It sounds informal but edgy, and as Mike pointed out, he’ll be able to keep it if we ever have a falling out (M F stands for not only Moore Fusco but also Mike Fusco!).