At long last, exactly eleven months after I first pressed “RECORD” at the opening session on August 10, 2010 (yes, I did start this album in the year it’s named for!), this is my final 2010 Project online journal entry.

Yesterday morning began fairly early as I arranged and recorded the background vocals for “Socrates’ Gulps” while Nicole was out for a walk.  When she came back home, I finished them while she took a shower.  Finally, I had to concede my need for breakfast, and we went out for brunch. 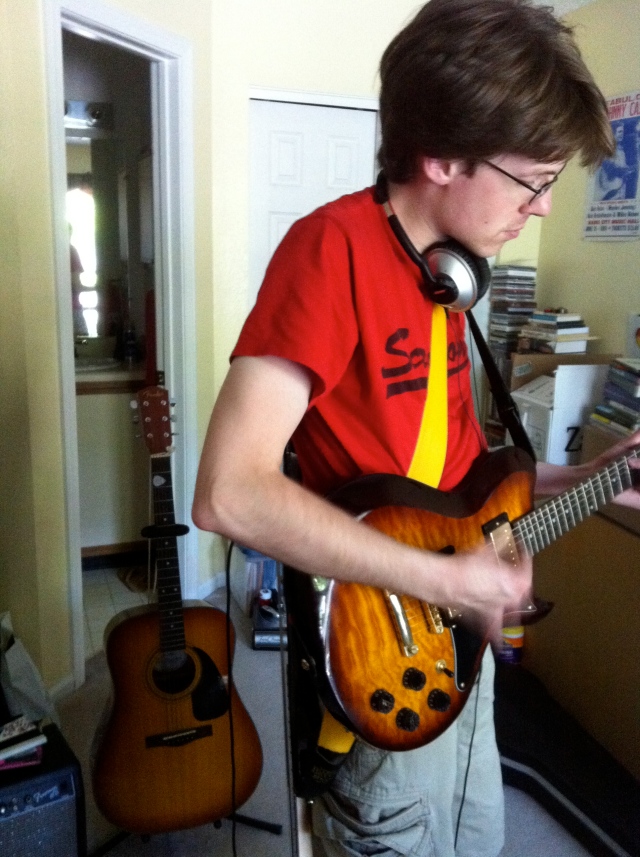 Figuring out a bass part on guitar

Brunch led to a trip to the Book Barn in Niantic, which was followed by grocery shopping.  By the time we arrived home, a leak had begun dripping from the ceiling in our bathroom.  Unfortunately, the woman who lives above us was out for the day and didn’t answer her phone on our first few calls.  We called our parents, the condo association… pretty much everyone short of the governor for advice.

Finally, when the ceiling began to buckle, we knew that this was no minor situation.

In the end, we called the fire department and had the opportunity to meet many nice firemen, a very helpful police officer, and our friendly neighborhood grounds/maintenance man…

…who, when no one could find the leak, came bearing a hacksaw.  (See picture below.) 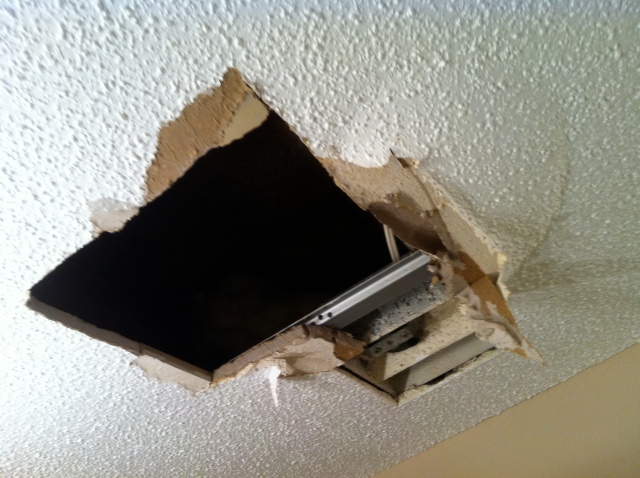 A leak led to firemen, a policeman, and a maintenance man bearing a hacksaw

Needless to say, by the time our last visitor left for the evening, the recording spirit was pretty much lost.

So, I picked up this morning with the bass, almost got it right (except for a part I’ve always heard in the song and which Mike suggested I convert to a bass line), had some amazing breakfast prepared by my wonderful girlfriend (who I hope is reading this :-)), and finished up the bass on “Socrates’ Gulps.”

So that, as they say, is that.  There’s some more mixing at Mike’s studio, some package design, and a few more loose ends to tie up before…

Check back soon for more updates!