Posted on July 7, 2011 by chrismooremusic

Although both days nineteen and twenty took place today, 7/7/2011, I have listed them separately because they were two quite distinct sessions.  The first took place in the early morning, as I arrived at Mike’s brand new studio just after 11:30pm on 7/6.  He began by setting up some equipment, and we got underway around 1am.  Over the next four hours, we listened to eight of the twelve tracks on the album and mixed them down to final versions.  We even got a chance to listen to the bonus tracks I’ve selected for the deluxe version of the album. 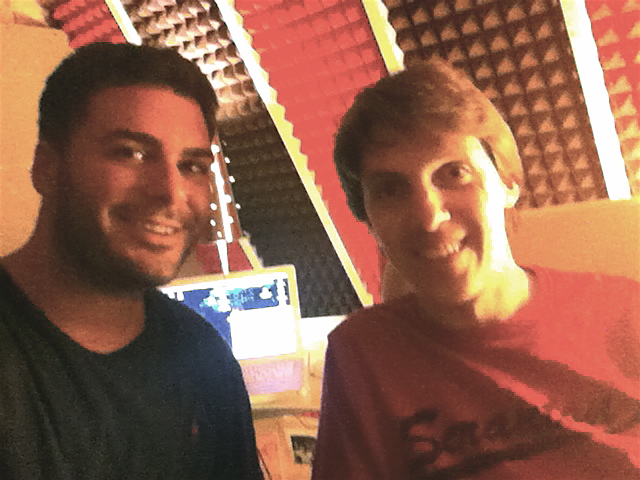 You can tell it was late just by looking at these photos, which were obviously taken without the aid of natural light.  Being that this was a late night (or, really, early morning) session, it brought back all sorts of memories for me, namely of past experiences with mOu and with Mike and Jim individually, as well as on the Meaningless sessions. 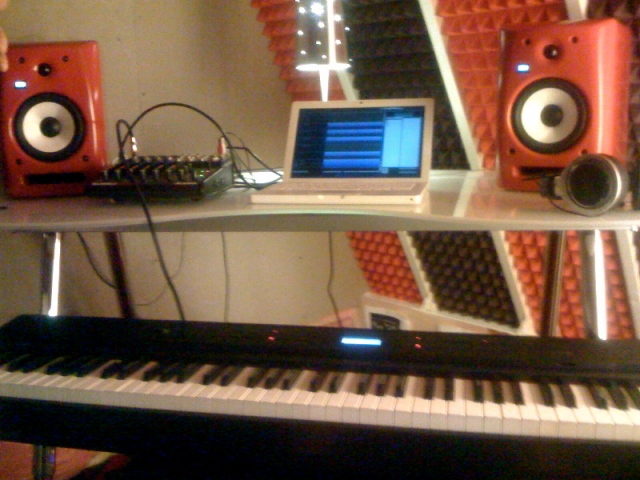 Tonight was one of those rare moments that are sufficient to sustain dreams for months and perhaps even years to come, a reaffirmation of what it is we do best and why we do it. 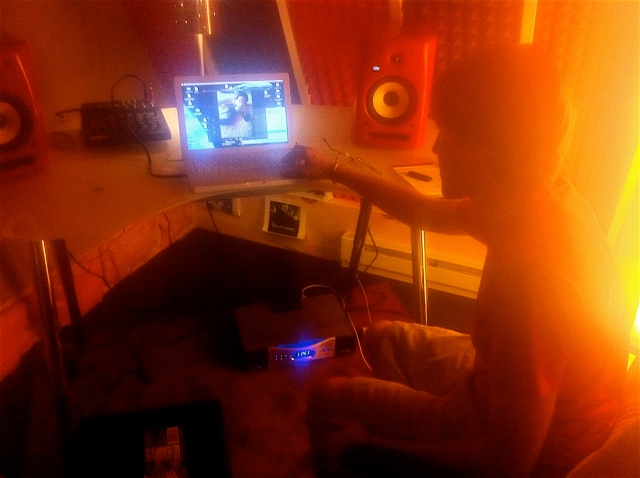 After I arrived home, I went directly to bed with my alarms set for 9:45 and following.

And I woke up after noon, with absolutely zero memory of my alarms ever having sounded.

This being said, I only had a few hours to record, and I used them to complete the electric solo and background vocals for “I Would Prefer Not To.”  Mike had recorded a sample set of background vocals on my iPhone that I heard him singing (and loved), so I used those as a model to complete the song.  The guitar solo came out quite well after I worked it out, found a guitar effect on my Zoom pedal that fit the song, and further worked it through GarageBand’s on-board set of effects.

After I finished these tracks, I moved on to “Work Time, Get in Line” and managed to complete the bass for this track before I headed back to Mike’s studio for more recording and mixing.

At his studio, we mixed down “I Would Prefer Not To,” then Mike re-taught me how to play congas (I had played them a bit during a DryKnuckle BedHeads jam months prior) and I finished that track on “Work Time,” and after dinner, Mike showed me a piano part for “Vows and Changes” that elevates the track to heartbreaking status.  With Mike’s instruction and coaching, I played the keyboard, and we easily finished mixing that song, to end the evening with a grand total of ten out of the twelve songs completed.

And all in time for the beginning of one of our favorite Thursday night activities: TNA wrestling!

If you haven’t heard, I’ve set tomorrow as the deadline for completing the recording of my album, so I’ll have to step it up and put the final finishing touches on “Work Time, Get in Line” and, with a bit more to do, “Socrates’ Gulps.”